Visit the site Website, video and digital strategy for a leading voice in health care improvement.

The Health Foundation is an independent charity working to improve the quality of health care in the UK. They support people working in health care practice and policy to make lasting improvements to health services.

Research with their audience had revealed that they were often time poor and struggling to find good information to support their work in improving the quality of health care. We supported the Health Foundation in establishing their role of ‘sense-makers’ across a range of projects.

The content and messaging is highly tailored to a series of different audience groups including patients, nurses, doctors and commissioners.

We developed a fully responsive website to introduce healthcare professionals and patients to the concept of ‘patient-centred care’ in partnership with PR agency Forster Communications. 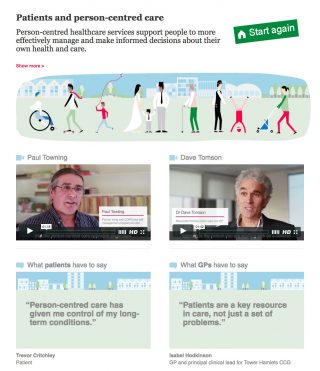 We were commissioned to produce a series of six mini documentary films to accompany an annual review. The video content was tightly planned, initial treatments including key messages were produced and we liaised closely with the featured grant holders. We organised and executed the shoots and edited and subtitled the films, delivering against a tight deadline. We have continued to regularly produce video content for The Health Foundation ever since.

We were recently commissioned to carry out a research project centred around a newly planned communications product. It involved consulting with staff, developing creative concepts and facilitating focus groups with staff working across the health service.